According to Global Genes, patients living with a rare disease visit, on average, 7 physicians and wait nearly 5 years to reach an accurate diagnosis. This ‘diagnostic odyssey’ from the onset of symptoms to final diagnosis can have devastating physical, emotional, and financial impacts on patients and their family. 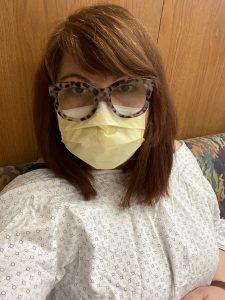 In this blog series, we share the story of one family’s journey with glucose-6-phosphate dehydrogenase deficiency (G6PDd). Despite the fact that most people have never heard of it, G6PDd is a relatively common enzyme deficiency, believed to affect about 400 million people worldwide. Yet, a lack of awareness and education about G6PDd means that the diagnostics odyssey for some patients, like Jessica Trivedi, is full of twists and turns.

Jessica’s story begins in Chicago, on Super Bowl Sunday, in the middle of a record-breaking snowstorm known as the Blizzard of ’79.

“I was born two weeks late and I started getting sick, my mom said, right away. I was jaundiced and had a red prickly rash,” said Jessica. “I was bottle-fed and eventually taken off formula and put on milk and rice due to feeding issues.”

At age five, Jessica was hospitalized for the first time with asthma. From then until her thirteenth birthday, she was hospitalized at least a dozen more times for various infections and episodes of pneumonia. During this time, Jessica also suffered from pain attacks labeled as abdominal migraines, anemia, and dental issues. 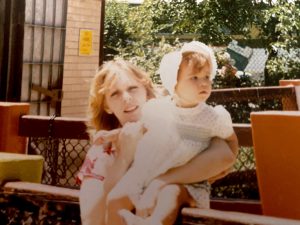 Jessica and her mother

Jessica’s mother took her to see a leading pediatric pulmonologist in Chicago who suspected that her illness may be linked to an enzyme issue, but the doctor could never figure out exactly what it was.

“I was on a lot of different medications and started receiving weekly steroid injections and allergy shots,” Jessica remembers. “I was constantly in this state where I was just not well.”

Despite persistent shortness of breath and chronic pain, Jessica managed through her early teenage years. At 19, she became pregnant with her first child. A year later, her second child was born.

Throughout her daughters’ childhood, Jessica continued to suffer from a variety of conditions that led to hospitalization, including abdominal pain, episodes of pneumonia, gastrointestinal issues, and lung infections. In 2002, Jessica was diagnosed with fibromyalgia.

For the next several years, Jessica’s health continued to decline. She suffered from an illness similar to meningitis, although her spinal tap was normal. She was hospitalized for three weeks with H1N1 and double pneumonia. After recovering from H1N1, Jessica became pregnant with her youngest daughter.

“Immediately after getting pregnant, I started having issues with being diabetic, which I had not had before. I had to take four different types of insulin,” Jessica said. “I continued to have horrible pains and I was hospitalized more than fifteen times during pregnancy because they thought I was going to have a stroke from the pain and doctors couldn’t figure out why.”

In September 2010, despite a difficult pregnancy, Jessica delivered a healthy baby girl. When she returned home with the baby, Jessica started to experience constant dizziness. When the baby was just a few months old, Jessica’s dizziness caused her to fall down the stairs while holding her daughter. The baby wasn’t hurt, but Jessica fractured her C7 and tailbone. It created a downward spiral of pain and surgeries, and Jessica was given some of the strongest pain medications available to cope.

Getting to the answers

In 2017, the Trivedi family decided it was time for a change. They packed up and moved from Chicago to Washington state. This disruption to the family’s medical care team came with a lot of changes. Jessica stopped taking all of her prescribed pain medications. Fewer, more transient healthcare providers in Washington forced Jessica to take an even more active role in medical research and treatment for herself.

Then in October 2019, Jessica underwent a routine colonoscopy. She woke up in the ICU portion of the emergency room. Nurses told her she may have suffered a broken rib because she would not wake up after the procedure and they had to perform CPR. After this, Jessica’s efforts to understand her illness kicked into overdrive.

“Something was changing. Around that time, I had started losing my sight and hearing. I was having cognitive issues and trouble walking. It was all blamed on fibromyalgia. I started thinking ‘I know a lot of people with fibromyalgia, and none of them are having these kinds of issues.’”

In 2020, Jessica underwent her first round of genetic testing. She also applied to be seen at the Mayo Clinic. After several visits to the clinic, doctors suspected a metabolic issue and wanted to have full genome sequencing done. So, they took a sample. Two weeks later, Jessica’s insurance called to explain that genome sequencing would not be covered, and in order to move forward with it the out-of-pocket cost would be almost $18,000.

“So, I was kind of at this place where I thought, well what do I do next? And I came up with my own idea to call my genetic counselor in Washington state. I knew I could afford to pay cash for his panels, and I thought maybe at least if a panel showed I had a neuromuscular disease, that would be enough for my insurance to cover the genome sequencing.”

The second round of genetic testing showed that Jessica had DHTKD1, an ultra-rare gene associated with a neuromuscular disease known as Charcot-Marie-Tooth (CMT) disease. Jessica applied to be seen at Cedars-Sinai’s CMT clinic.

By this point, it had been a year since Jessica received her test results. No one had ever raised concerns about the G6PD variants shown on the report.

“It was the genetic expert at Cedars-Sinai who went the extra mile and researched the G6PD variants finding on the report that I submitted to them, from my genetic counselor in Washington state. She was actually the only person who took the time and did a little research and found that within the Invitae database they are listed as variants of uncertain significance. But they are listed as a positive pathogenic in other databases.” 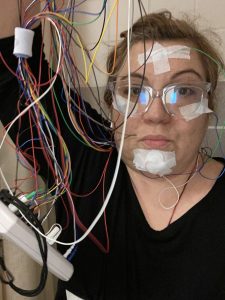 Jessica as she undergoes testing at a recent Mayo Clinic visit

Just this year, in February 2022, Jessica returned to the Mayo Clinic for further testing. Her G6PD quantitative results were 2.8 U/gHb, confirming that Jessica is G6PD deficient. With Jessica’s diagnosis established, her medical history starts to make much more sense.

“I think back to when I had H1N1. I was treated with medicines like ciprofloxacin and metformin, which are known to cause issues for people with G6PD deficiency.”

Yet, even with a diagnosis confirmed, Jessica has struggled to maintain a good quality of life, especially since the birth of her youngest daughter in 2010. She attends classes at the Mayo Clinic designed to help her learn to manage and live with her symptoms without the need for strong pain medicine, but it is still a constant battle.

The impact of Jessica’s diagnostic odyssey

While Jessica’s story is certainly a unique one, the impact of her diagnostic odyssey is sadly something many rare disease patients find relatable.

“It’s frustrating to think that the answers may have always been there,” Jessica said. “As a young girl, I was on so many medications. There’s a lot of things that happen with that. Kids miss school, you fall behind, it creates financial issues for families. There’s a lifetime of that.”

The physical, emotional, and financial damage is almost unimaginable. Yet, in her time spent reviewing her own medical records, Jessica took note of a few facts that bring some perspective to what she’s been through:

Beyond the numbers, there is an emotional impact that’s difficult for Jessica to revisit.

“I mean honestly most of my daughters’ teenage years I was hospitalized. As a family, we’re just now starting to talk about those things because you don’t realize until it’s done and over what you missed out on.” Fighting back tears, Jessica continues, “But, you know, it’s also them [my daughters] saying ‘no, we’ve been seeing you fight this whole time, looking for answers.’”

Throughout Jessica’s journey, there are pivotal moments where her proactive approach and independent medical research undoubtedly brought her closer to a diagnosis. So, what can be done to improve the diagnostic odyssey for people living with G6PD deficiency?

Universal testing is key to provide everyone a healthy start

G6PD deficiency affects about 10 to 14 out of every 100 African-American men in the United States. It is also more common in people from the Mediterranean area, Africa, or Asia. G6PD deficiency is rare in women.

Yet, Jessica’s story is the perfect example to illustrate why testing at-risk populations isn’t enough.  By the criteria above, Jessica would not be considered at risk. Yet, one generation back, Jessica’s father is Congolese, Portuguese, and Spanish. Universal testing helps ensure no one falls through the cracks.

“There are nations that test every baby regardless of race, which tells you the testing is available and affordable,” said Jessica. “I think there’s a lot in our medical system that needs change and I think part of it is starting with babies. If, at any point, one of my babies, or any baby in my family had been tested for this it may have been a clue to something that may have lessened the burden.”

In a recent MLO webinar titled Don’t Let G6PD Off the Hook!, Dr. Robert Christensen, a neonatologist, professor of pediatrics at the University of Utah, and G6PD deficiency subject matter expert, expands on the importance of testing for G6PD deficiency in populations where its incidence is thought to be very low.

To address the need for fast, accurate, and affordable testing, Baebies has developed the FINDER® G6PD platform*, which provides G6PD quantitative results in as little as 15 minutes after sample introduction. The CE-marked FINDER G6PD platform is compact and easy to use to enable near-patient testing.

Hope for the future

Jessica’s story is a testament to the power of determination and hope. Jessica sums it up best herself.

“That’s my story for now. There’s a ton of hospitalizations, and surgeries, and near-death experiences that are all wrapped in it. I’m estimating that I’ve had over 100 pneumonias, I’ve had a version of tuberculosis, meningitis. I’ve had H1N1. I’ve had COVID-19. I’ve pretty much had…everything. But I’ve survived it, too. Which I think is amazing, and that’s why I think it’s important to share this story.”

While universal newborn screening in public health labs can provide results, stay tuned for our next blog article about Jessica’s daughters, and how pre-discharge testing could have changed their clinical course for the better.

Jessica’s middle daughter, Sarah, was born early and contracted RSV in the nursery. She would spend the first two years of her life in and out of Children’s Memorial Hospital mimicking a child with cystic fibrosis.

At 18 months old, Jessica’s youngest daughter, Isabelle, was admitted to the hospital after becoming sick with a fever that wouldn’t break. Test results showed that she had a hemoglobin of 3 g/dL, well below the expected 12 g/dL.

*FINDER® is CE-marked and not commercially available in the U.S.

On behalf of the Baebies team, we’d like to extend a heartfelt thank you to Jessica Trivedi and her family for sharing their incredible story. We are honored to partner with them in bringing awareness to G6PD deficiency so that we can help more people everywhere have a healthy start.

Visit the Knowledge Center for peer-reviewed publications and additional resources.